MEMBERS ONLY
BECOME A MEMBER

On The Green River 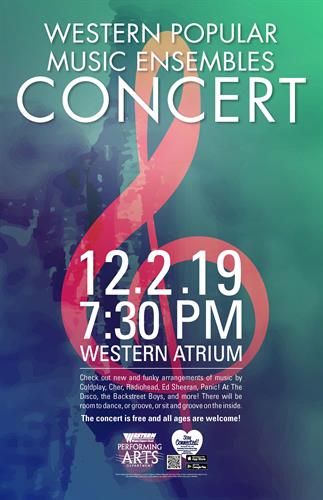 Event Description:
Enter a funky world of Grammy winning music by artists including Coldplay, Ed Sheeran, Cher, and Radiohead. The show will treat listeners to a “groovetastic buffet” as they sample new funky arrangements. There is no need for attendees to fight the urge to dance during the concert, as it is being performed in the atrium with plenty of room to shake a leg.

Western’s pop ensemble and vocal ensemble will serve up new dance versions of classic pop music hits such as Radiohead’s “Creep” and Cher’s “Believe.” Tunes like the Backstreet Boys’ “I Want It That Way” or Hanson’s “MMMBop” will get a facelift from Western’s pop music group.